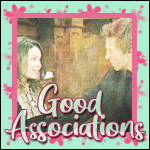 I mentioned last week that I don’t write a lot of fluff and what I could found was mostly non-Liason. I’ve got some sweet teen stuff from the mid-00s, and some farcical comedy stuff, mostly with Patrick or Carly because I think they have character types that lend themselves easily to that. But Liason? Baby, we’ve never been a fluffy couple. We have our sweetness, we have our moments, but we are a story of angst.

That being said, when I took a look at the 2004 stories I need to reformat and clean up, I found Good Associations tucked away on the Series page where I think it’s mostly been lost to time. It’s one of the reasons I’ve been merging all my stories onto two pages because I think they’re too fragmented and stories I genuinely like get lost in the mix. Now that I’ve set the stage — what is Good Associations?

It was originally written as a one-shot based on a weird storyline back in January 2004. Carly was in Shadybrooke or Ferncliffe, and Jason was there. He ended up getting injected with medicine that was meant for her, and left. The doctor told her it’d be okay, Jason would go to a safe place. (Yes, I assure we thought this sounded dumb seventeen years ago.) Of course, on the show, he went to estranged wife, Courtney, but I’m a Liason fan. I wrote the story and posted at Liason Underground and probably the Canvas, but it’s LU that gives you the rest of the story.

When I went to go find old versions of my stories on the LU boards, I found the original postings of these stories and it never failed. In every single post, Cathy had a suggestion for what should come next. Cathy (ezbrowncat) was one of my favorite people back in the day, and was one of the OG MAGR girls (Meet & Greet Road Trip). In 2003, five of us met in Washington, D.C, then a year later eleven us of us went to New York. Finally, in 2005, another group got together in Toronto, the first time I’d ever flown on a plane. When I think of my early days in the fandom, I think of the LU girls and the MAGR subset. We spent HOURS in Ezboard chat, writing flash fic, giggling, talking about real life. We were all ages, all kinds of people but we shared a deep love for the show and for these characters.

When I posted the first part of this story, everyone wanted to see what would happen when Jason woke up, so I wrote it. Then Cathy said maybe they should set up a crib, so I wrote it. It was nicknamed the Incomplete Complete fic because everytime I posted, I swore it was the last. But my friends kept pushing for more, and I kept doing it because I loved them, LOL. Finally, we decided we’d done enough.

What emerged is a short Liason fluff piece that has a few moments of serious, but is generally just sweetness. When I reread it now, I remember those days and the nights spent in chat. Twitter is fun, but I really miss the boards sometimes and the small little bubble we created for ourselves.

Have you ever read Good Associations before? Or is this the first time you’ve seen it?

Have a day and I’ll see you on Saturday for the next Flash Fiction! I’m starting to get back into writing and I’m really enjoying it. I’ll give more details on Saturday.