Thank you so much for all the kind words and thoughts on yesterday’s post. It was a really hard morning, but I worked on a few projects and actually wrote the epilogue to Mad World (better late than never), and it kept my mind pretty distracted. Sleeping was hard, and I didn’t really want to get out of bed, but here I am. I’m writing this post before I actually get started today, so I don’t even know how this is going to go since today’s scenes set directly after Alan’s death. That may or may not be a good thing. 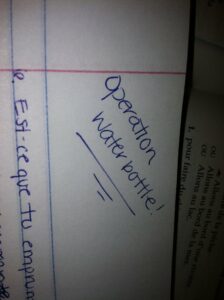 I wanted to share another memory because it’s helping to go through all our old pictures. Lauren and I met in college, and we majored in History together. I had a second major in French, and she had her second major in Political Science. She took French as a minor, so we had a lot of classes together. One summer, we took French together, and we used to write notes in each other’s notebooks in the margins. Our professors both loved and hated us. There was a kid in our class who annoyed us (I can’t honestly tell you why after like 11 years to be honest), and we used to make jokes about throwing our water bottle at him. We never would, of course, but it would defuse our irritation to make notes like this.

We got through French together by the skin of our teeth (she found it hysterical when I got hired to teach it). We took a class where we were reading The Phantom of the Opera in its original French. We bought the book, opened to the first page, and we literally started crying in the Rutgers café because it looked like complete gibberish to us.  We ended up buying an English translation, so we could read it in English, then read the French, THEN read the English again. Somehow, we earned As.

We survived French, and German Lit. And Dr. Soll. And all the other classes that came later. A lot of Starbucks from the café and pints from the bars after classes. Absolutely never would have survived without her.